The International Center for Hope assisted 93 needy families during the year 2004 at the total sum of 44042 rubles. The families needed clothing, coats, shoes, medicines, hygiene products, and food. They do not have the funds to purchase food or clothing.

Children fr om Internoit-School #2 and children fr om four orphanages around the City of Izhevsk and six out-of-town orphanages in the Udmurtia Republic have been touched by the Christmas performance. The staff and volunteers traveled many miles on several different days in order that these children could see the performance and receive Christmas presents. We even spent the night in one of the orphanages. Volunteers had an opportunity not only to perform, but also to talk and play basketball with the children.

We have found a new office and just moved into it. We don't doubt that we will spend much time to repair it. But now we have a 3-roomed flat with a kitchen, foyer, toilet room and bathroom. We hope that this office will allow many orphans and kids from internoits to visit us more often, even on weekends and holidays and to feel there as if they were at home.

We painted, put in flooring, fixed up light fixtures, plugs etc in our new office. Children from internoits came to do volunteer work for us. Now they have a room to watch films and enough space to play and to have tea. It's worth seeing them happy. Currently, we have A Clothes Closet which is filled with clothing items received from friends in America and from some local people here in Izhevsk. We also had volunteers that helped with curtains. We purchased a steel door for security and up to the day the door was installed, the staff took turns sleeping at the office in order to protect the items in the Center. This was not mandated, they just felt that it was necessary.
We received boxes of material from friends in America. The cloth will help many have something to wear. Many of the girls know how to sew so this is a great blessing to be able to provide the cloth for them.
Our Director of ICH has been speaking at different churches telling the people about becoming a Foster Parent and the Foster Parent Plan. Thus far, she has gotten several families to take a child and raise it. We are now praying that many more children will be taken into a good home. Some are taking children for a holiday or for a week-end.

In the Easter holidays, we were allowed to present the Easter story and performances. We traveled out of town to the orphanage in Igra, which is about 40 kilometers from the city of Izhevsk. The players from the Christian group "Parable," sang Christian songs, danced and entertained the kids there. We gave them nice clothes, Bibles and very humorous films. The director of the orphanage thanked us a lot for all and asked, "why are your girls so different than the girls here?" It was a perfect time to share the story of Jesus. 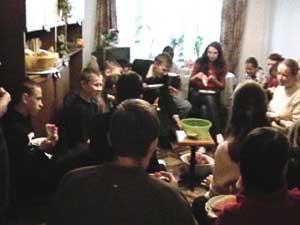 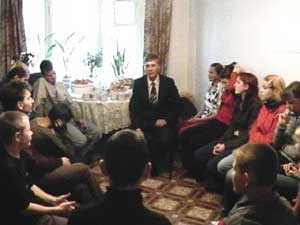 Easter performances were given for the kids at Internoit #75, The Rehabilitation Center for Abused children and The Municipal Orphanage. The youth from Church of Philadelphia did the programs and were well received. The performances were amusing and the students received an example of kindness and God's love.

Also we gave 10,000 rubles to the Municipal Orphanage towards repairs for their bus.

One female came into the Center because she could not receive assistance from anyone in Izhevsk. Her home had burned and she had 2 children. She was told that she should put her children in the orphanage and get a job, "After all you are a woman!"
We did assist her with clothes, shoes, food and her sister helped find her a place to live.

Medicines for the kids from Internoit #75 were purchased and they were given to the administration at the school. We also presented Internoit-school #2 with watches. A celebration of the anniversary of the school was held this month and children gave the performance for all teachers, graduates and the rest of the children. Our watches were presents for players.

With special funds received from America, we were able to buy a tractor for the Kez orphanage and help them repair their bus engine. Last year their tractor and bus were destroyed in a fire. They depend on growing their own food to feed the children during the year and need a tractor to do this. The school bus is very important too, because they use it not only to deliver the kids to camps, but to hospitals to growing fields for work there.

ICH was able to give, as a gift, a video player and several videos with cartoon films and movies to The Republic Social Rehabilitation Center for under age children. All orphanages are supported by the Government but sometimes it is not enough for all their needs. This month, orphanage # 75 received money from ICH for buying hygiene products and school supplies.
Money support was given to Internoit School-Orphanage#2 to help the Director in buying photographic paper and films for their photography studio.
The State Women's Council received monetary help in getting food for their cooking classes. This is one of their programs that they have started. It helps needy families who have many children and others that are in need.
Thanks to The International Center for Hope, play ground equipment "Friend" was installed at the Municipal Special Center for the children under age who are in need of social rehabilitation. The Center of Psychological and Medico gives social help to neglected children. Children, as well as the workers, received a lot of joy.
There were not enough beds for the children who have just been accepted at the Orphanage #75. This year, ICH transferred the money for buying nine wooden beds.
The International Center for Hope made a presentation of the working program "Home wh ere the Love lives" at the Orphanage #2. Every week, children have spiritual-aesthetic meetings wh ere they learn how to be kind, merciful and to find right solutions for difficult situations.
Various out of town trips have being planned for the children. At the end of a school year, all the children, who attend these activities, and those, who tried to be kind and merciful during the year, are invited to the holiday "The Day of Light and Kindness".

December has been a month of big and the last preparation for the Christmas performance: the last rehearsals of the theater group, costumes for performers were finished, solution to all organizing questions with the theatre "Palace of Culture". All the orphanages were invited, and, certainly, the much work in packing 800 New Year's presents for the children came to an end.

Paul Maiden, Director of the School of Social Work from the University of Central Florida, and his wife Anschion brought a lot of scarves and hats. Anschion had decided to knit warm cloths for children-orphans and to give them to The Center. Many people from different states learned about it from a newspaper article that was written about her project and followed her idea. These folks also knitted scarves and hats and sent them to her to bring here when they visited over the Christmas holidays.
The International Center for Hope expresses thankfulness to everybody who participated in that project. 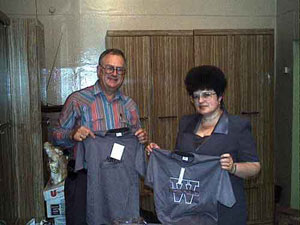 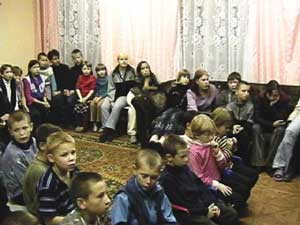 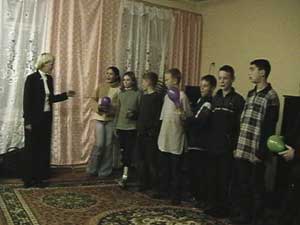 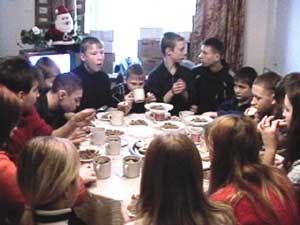 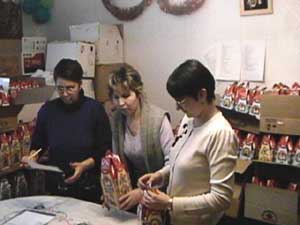